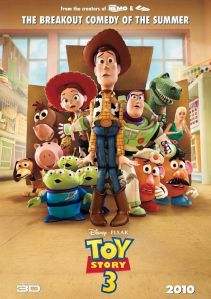 Howdy do, b-rollers! It’s been a quiet week, my apologies. I actually read a few books in the absence of a packed television schedule, and I feel terribly cultured for having done so. And unless you care about my thoughts on Graham Greene’s The Quiet American (lest you think me too literary, my previous library selection was Carrie Fisher’s Wishful Drinking), well, there wasn’t a whole hell of a lot to share.

Anywho, I’m checking in today to gleefully inform you all that I’m going to see Toy Story 3 in a few hours. My love of Pixar is duly noted in many a b-roll post, and according to critics, this is the best Toy Story yet. I don’t know how that’s possible since the first two were pretty damn perfect, but there you have it.

One observation I had after reading the scores of stellar reviews – and I found this interesting, maybe you won’t but humor me – was the varying ways that critics compared Toy Story 3 to the other Pixar films. Most agreed that it belonged with Pixar’s best – and let’s face it, the Pixar gamut goes from “really good” to “all-time amazing” anyway – but they don’t seem to agree on which films are Pixar’s best. Some thought early Pixar (Toy Story, A Bug’s Life, Toy Story 2) was the Golden era; another referenced the more recent films (WALL-E, Up) as Pixar’s “masterpieces”; and yet another said that Toy Story 3 was the best Pixar film since The Incredibles. Huh.

You probably see where I’m going with this – and if you don’t, welcome for the first time to the b-roll blog! – but starting Monday, plan for an official b-roll ranking of the Pixar stable, Toy Story 3 ranked somewhere among them. If you’ve read this blog in the past, you probably know which film tops my current list; but if Toy Story 3 is as good as everyone says it is, we may have a new contender for the top spot.

Until then, make your case for your favorite Pixar film here. Have a great weekend, b-rollers!