Skip to content
Menu Home Off to Wonderland
Close 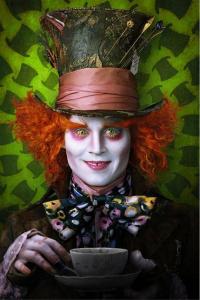 It’s a glorious weekend to be alive/a movie fan. The sun is shining, the Oscars are tomorrow, and in two hours, I’m seeing Alice in Wonderland.

I’ll post my thoughts on it early next week, but I should probably share the following caveat: I love Tim Burton’s films. Loved Ed Wood, loved Edward Scissorhands, Sleepy Hollow, Sweeney Todd, Beetlejuice. I even liked Charlie and the Chocolate Factory, which put me in a minority. And Big Fish is one of my all-time favorites – beautiful, emotional, wildly underrated.

Like most breathing humans, I also worship Johnny Depp, particularly in Tim Burton’s films. If Depp signed on to play Todd Palin in the Burton-directed film adaptation of Going Rogue, I would drag my liberal butt through a blizzard to see the movie on opening weekend. That film should definitely happen, by the way.

So, in summation: I have been excited about Alice for a while, and today, when I put on my awkward, Elvis Costello-like 3D glasses (when did those stop being cardboard?), they will be distinctly rose-colored. And if I rave unabashedly, you should take that with a Jabberwocky-sized grain of salt.

I hope to see you back here tomorrow night for the Oscar live-blog. Until then – see you in Wonderland.